We know, you’re thinking WTF?  But we don’t make this stuff up and haven’t you wondered if the crazy old lady with all those cats was actually crazy?  Well breathe easy, because as reported in Science Daily, new research from the University College London has found no link between cat ownership and psychotic symptoms.  The study looked at nearly 5,000 people born in 1991 or 1992 who were followed-up until the age of 18 and for which there was data to know if the households had cats while the mother was pregnant and when the children were growing up.

What even prompted this study you ask?  Some recent research had suggested that cat ownership might contribute to mental illness because cats are the primary host of the parasite Toxoplasma Gondii.  According to the lead author of the study, and to the relief of cat lovers everywhere, “In our study, initial unadjusted analyses suggested a small link between cat ownership and psychotic symptoms at age 13, but this turned out to be due to other factors. Once we controlled for factors such as household over-crowding and socioeconomic status, the data showed that cats were not to 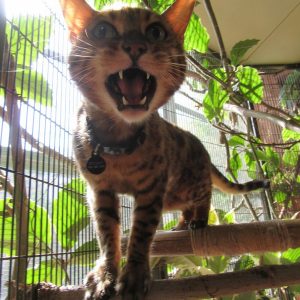 The study did remind parents and potential parents that while the study suggests no link between cat ownership and mental illness that there was still good evidence to support that Toxoplasma Gondii during pregnancy can lead to birth defects and that pregnant women should not change cat litter.

So what does this mean?  It might just mean that there will be even more cats tortured by toddlers, but at least if the cat can’t rest easy and might be subject to mental illness due to harassment by a toddler that parents can rest easy knowing that the cat won’t cause the kid any mental illness.