October is National Pit Bull Awareness month, and we here at Pet Camp are saluting our blocky-headed campers with even more hugs and kisses than they already get here on a normal day! As the proud mother to my own blockhead “Magoo,” I’ve had just as many people smile at and praise my dog as I’ve had parents scoop up their children and run the other direction. Although I’ve grown a pretty thick skin after all these years, and don’t let those types of encounters bother me too much (before Magoo I had a giant Rottweiler named Stuart, so I know the drill), I still can’t help but wonder where that fear comes from. 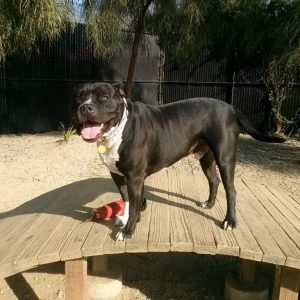 Sure, we’ve all seen sensational news headlines about dangerous pit bulls, but what about the hundreds of other dogs of various breeds who also bite people every day? Why don’t they make it on the evening news? Or, when they do, why is their breed not called out (it’s usually announced as just “dog” attack,)? One explanation may be the various myths that have circulated about Pit bulls over the years; in honor of this special month, I’ve decided to highlight (and hopefully help bust) 3 of the most popular.

Myth #1: Locking jaws
There is a myth that somehow got started about pit bulls’ jaws automatically locking when they bite down on something. A visit to the Bad Rap website will steer you towards research done by Dr. I. Lehr Brisbin from the University of Georgia which shows that there is no evidence of any special locking mechanism built into the structure of a pit bull’s jaw or teeth.  Pit Bulls (which, but the way, is a very generic term for any type of dog with a large blocky head and body) were historically used as catch dogs for large game and therefore generally tend to bite and hold. However that is different from having a physiological mechanism that causes them to lock their jaws. Perhaps the locking jaw myth (along with the next 2) were created by nefarious people who intentionally meant to paint these dogs as fearsome, man-eating beasts not to be reckoned with, but c’mon: they’re dogs, not alligators!

Myth #2: Pit Bulls will turn on their owners, and are just naturally human aggressive
This is one I’ve heard personally. Shortly after adopting Magoo, I was on the phone with my dad telling him all about my new dog. When he heard that Magoo was a pit bull, the first thing out of his mouth was, “well, just make sure he doesn’t turn on you.” I was pretty surprised to hear this come from my dad, not only because he’s been a life-long dog owner, but also because one of our family dogs was A PIT BULL! Yes, a large, strong, muscular tan and white pit bull running around the yard with my 6 year old brother and toddler me.  I mean really, dad, come on! It seems that even he fell into the trap of believing false hype surrounding a maligned breed. As with ANY breed of dog, a pit bull who is physically and mentally healthy, given adequate socialization as early and often as possible, and is responsibly managed by their human will be a happy, trustworthy dog around all sorts of people in all sorts of situations, including with other dogs. In fact, while we’re on the subject: Myth #2.5 being that all pit bulls are dog aggressive? Guess what, they’re not! Having seen thousands (and I mean THOUSANDS) of different dogs come and go at Pet Camp, I can assure you that even Labradors fight, and Golden retrievers bite! 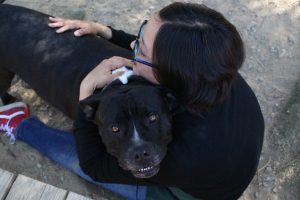 Myth #3: Pit Bulls make good guard dogs
This myth goes hand in hand with Myth #2. Despite their intimidating looks and their larger-than-life reputation, Pit Bulls actually make terrible guard dogs; they simply were not bred for that capacity. Pit bull terriers (a cross between the strong, hardy Olde English Bulldogge and the tenacious terrier) were bred for bull and bear baiting in England, and when that was outlawed for being cruel, they were used in fighting rings for sport (something “less cruel,” apparently!). As such, any dog that displayed aggression towards humans was culled from the litter to ensure that handlers could safely enter a ring and grab their dog without being bitten. This reputation of being of sound mind and temperament with humans carried over throughout the years, and when pit bulls emigrated from the UK to the USA in the 19th and turn of the 20th centuries their reputations came with them, quickly garnering them the status of “America’s dog” because of the very traits that Americans saw in these dogs and felt were reflected in themselves: friendliness, athleticism, loyalty and a sparkling personality.

So how did these myths get started? How did pit bulls go from America’s Dog to Public Enemy #1? What happened to Petey, the intrepid pit bull sidekick with the bullseye face marking that followed the Little Rascals around? How did we forget about Sargent Stubby, a rescued Staffordshire terrier who became a full-fledged decorated WW1 hero, credited with comforting wounded soldiers, leading men to safety through mustard gas attacks, and helping to track down and trap enemy soldiers? Several different dog breeds have gone through their own cycles of malicious myths and vilification (“Cujo” and St. Bernards, “The Omen” and Rottweilers, and even Dobermans have been targeted), so it seems that this sort of fear mongering is bound to happen. Hopefully, with more education, responsible dog ownership, and continued positive exposure in the community, pit bulls will, just like their previously disparaged canine brethren, shake off their 15 minutes of “infamy” and once again become not just America’s Dog, but, most importantly, simply a dog.

Thanks for reading and watching.

This is a guest blog by Michelle Barerra.  “Head Honcho” at Pet Camp and proud pet parent of Magoo.